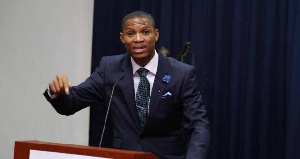 Francis Xavier Sosu, Member of Parliament for the Madina Constituency

The Member of Parliament for Madina Constituency, Francis-Xavier Sosu, has said there is a need for the conduction of an independent investigation into the explosion at Apiate which claimed 17 lives.

He believes this is necessary because the tragedy raises serious matters of Human rights violations.

According to him, lives and livelihood have been lost which raises issues of state inactions and potential regulatory failures.

In a Facebook post, he said there is a need for investigation as Ghanaians need to know if the company transporting the explosives complied with the laws or it was purely an accident.

“I am certain that the Minister of Lands and Natural Resources would take special interest in this matter particularly with compliance issues as provided for under the Minerals and Mining (Explosives) Regulations, 2012 (L.I. 2177).”

“As the Minister may well know, the Regulations cover administration, certification, licensing and allocation of permits, packaging, reporting, manufacturing, transporting and storage of explosives. The regulations also state techniques for using the explosives in different locations. This may be underground or surface mines as well as obligatory safety and environmental precautions.

This is an issue of serious public interest and as such, it will be helpful to have full report on this matter to satisfy ourselves as a people that the Company duly complied with our laws, and what happened was purely accidental,” he said.

This explosion raises serious matters of Human rights violations as lives and livelihoods have been lost and it also raises serious issues of state inactions and potential regulatory failures which must be investigated thoroughly,” he added in the tweet.

Over five hundred people have been rendered homeless at Apiate, a community near Bogoso in the Prestea Huni Valley Municipality in an explosion, killing about seventeen people and leaving several others severely injured.

The explosion was caused by a truck belonging to a mining service contractor MAXAM that was involved in a collision causing an explosion in the community.

The truck carrying the explosive was from Bogoso heading towards Kinross, a mining company in Chirano in the Western North Region, 140 kilometers away from the explosion site.