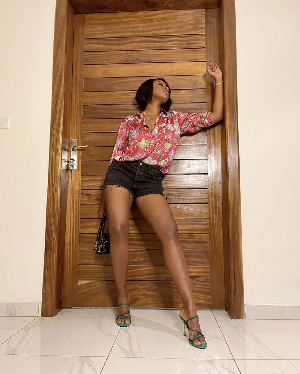 Ghanaian actress and entrepreneur, Yvonne Nelson has shared a picture of her flaunting her legs in a sleek and graceful pose on social media.

In a picture shared by the actress, she wore a short pair of black jeans with a red flowery top as she leaned back on a door with one leg forward and her left arm up.

In a previous post from the actress, she advised the Ghanaian youth not to allow themselves to be pressured by the glamorous lifestyles of celebrities and personalities on social media.

According to her post on January 8, 2022, no one on social media is posting their struggles or what they are not best at.

“Don’t let the internet RUSH you…..no one is posting their failures.” she tweeted.

The award-winning actress, who is known to be a workaholic, in August 2021 compiled a list of her accomplishments after a blogger accused her of no longer being relevant since she became a mother.