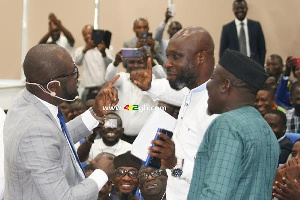 Former Ghana Football Association (GFA) vice president, George Afriyie has blasted the handlers of the senior national team the Black Stars for building a national team with players who are affiliated to either themselves or friends.

The 2019 GFA Presidential candidate says that croyinsm should not be the order of the day for inviting players to the Black Stars to the neglect of qualified players who have no association with the present regime.

Ghana crushed out of the tournament after losing to lowly ranked Comoros Island 3-2 on Tuesday when many expected the Black Stars to win to qualify.

The Black Stars lost their opening game to Morocco by 1-0 before drawing 1-1 with Gabon and losing 3-2 to the 132nd ranked Comoros Island.

But, George Afriyie, who is a former Ghana Football Association vice president reacting to the Black Stars exit from the tournament said players must be invited to the national team based on their affiliation with highly ranked personalities who are in charge of our game.

“We don’t build a national team by calling players who are affiliated to us, our friends or ignore players who a represented by our opponents,” he told Accra based Asaase Radio.

“That is not how you build a team,” the former Black Stars management committee chairman added.

The Kurt Okraku led administration has been accused of calling up players who affilliated to the GFA boss or his cronies with the likes of Philemon Baffour, Emmanuel Lomotey, Benjamin Tetteh among others cited.