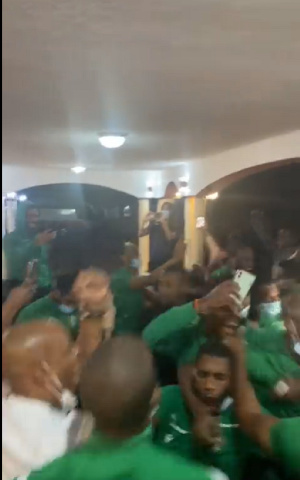 Comoros players were left in a joyous mood after their round of 16 qualifications was confirmed on Thursday, January 20, 2022.

The Coelacanths beat the Black Stars 3-2 in their final group game to finish third place in Group C with 3 points.

In order for their qualification to be confirmed, they needed Equatorial Guinea to beat Sierra Leone, who needed at least a draw to qualify after Ivory Coast beat Algeria.

Eventually, the Nzalang Nacional pipped the Leone Stars 1-0, and the win qualifies Comoros to the round of 16 as one of the four best third-place teams.

They join Cape Verde and Malawi with one slot up for grabs in Group F.

The players who were monitoring the aforementioned match on TV could not hide their joy of making the knockout stage on their debut AFCON appearance.

They were watching on TV ???? to be sure they had made it through.