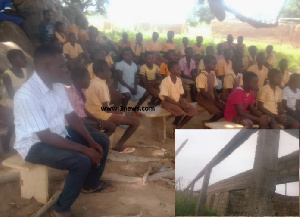 The pupils of the school are seen here under a tree

A decision by the Ghana Education Service to not allow a Junior High School to be operated in an uncompleted building may render some 150 pupils of the Goo-Atandaa Primary School in the Bongo District dropouts.

This has come about after the GES inspected the school’s infrastructure and decided it was not fit to start a Junior High School, reports 3news.com.

The pupils, who are moving to the JHS after having been promoted have since been caught in the middle of the decision by the GES District office in the Upper East Region.

According to the authorities who undertook the inspection, the school is without adequate infrastructure to accommodate its first batch of JHS students.

It was also observed that pupils from kindergarten to Primary 6 in the school currently learn in open spaces, under trees and a few others shelter at a church building close-by.

“Through the intervention of an non-governmental organisation (NGO), an eight-unit classroom room block has been under construction for the past two-and-a-half years though it is currently at roofing level.

“The school authorities wanted the pioneer JHS students to be accommodated in the uncompleted structure but GES declined their request, saying they cannot risk the lives of the school children in the harsh weather,” the 3news report said.

The parents and teachers of the school have therefore appealed for support to help the school complete the uncompleted school block, so as to safeguard the future of the pupils.