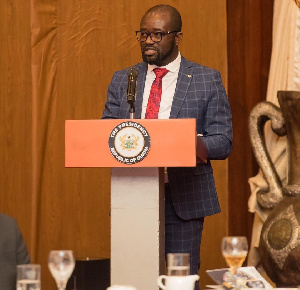 The President of the Ghana Football Association, Kurt E. S. Okraku has cleared the air on claims that the football leadership imposes players on the Black Stars Coach.

Allegations have been rife that the Black Stars Coach is always forced to hand callups to certain undeserving players who only get such privileges due to their affiliation with a person in authority within the Football fraternity.

These claims have gathered momentum in the wake of Ghana’s dismal showing and shocking first round exit at the ongoing Africa Cup of Nations tournament in Cameroon.

There is also a belief that some top players were left out while the selection of the Black Stars squad for the tournament was influenced by cronyism and nepotism.

In an interview with Asempa FM, the GFA boss, Kurt Okraku has refuted such claims insisting that selection of players into the national team lies with the Head Coach and his technical team.

“I’ve listened to a lot of commentaries about the players Coach Milovan selected for the tournament and I wonder why there are complaints.

“Every player Coach Milovan selected deserved to be selected and each of them gave off their best during this tournament.

“Coach Milovan and his technical select the players for our country and they stuck by that philosophy and we supported them throughout.

“Nobody selects players for the Coach, if a coach has handled Ghana previously and allowed players to be selected for him, then he doesn’t deserve to be the Coach,” he concluded.

Ghana finished an embarrassing 4th position in their 2021 Africa Cup of Nations group, picking just a point from 3 games. The nadir of Ghana’s abject showing was a humiliating defeat to lowly Comoros on Tuesday; a result that has made Ghanaians furious with all that has played out in Cameroon.