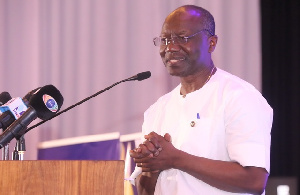 E-levy to be re-laid before parliament

E-levy should be seen as burden-sharing, Finance Minister

Mechanics of e-levy to be communicated clearly, Ofori-Atta

Finance Minister, Ken Ofori-Atta, has disclosed that beginning Thursday, January 20, 2022, government officials, including himself will embark on a public sensitization campaign across the country on the controversial e-levy.

The public engagement forms part of measures by government to explain to Ghanaians the need for them to accept the e-levy and the benefit it comes with it when implemented.

The e-levy which is a burden-sharing approach to generate revenue will help bolster developmental projects in the country.

Speaking at a press conference in Accra on Wednesday, January 19, 2022, Ken Ofori-Atta said, “Beginning tomorrow [Thursday], a team comprising myself, colleague ministers, and other key members of government will embark on a public engagement and sensitization campaign across the country. We intend to communicate clearly on the proposed mechanics of the e-levy, its potential benefits to the people of Ghana within the spirit of burden-sharing that must guide us in our development efforts as we move Ghana Beyond Aid.”

Meanwhile, government intends to use the money accrued from e-levy to create jobs, grow the private sector to employ more of the teeming unemployment youth in the country.

The revenue generated will also accelerate government’s digitalization agenda, enhance security of Ghanaians on digital platforms, aggressively expand the country’s road infrastructure agenda, reduce dependence on debt and reduce the crowding out of the private sector to improve access to credit.