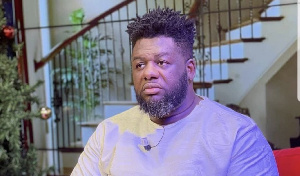 Black Stars out of AFCON race

Lawrence Nana Asiamah Hanson, popularly known as ‘Bulldog’ has labelled Ghana’s football sector as wasteful and fruitless adding that it does not deserve any further investment.

He has asked the government to rather channel its resources into the hospitality and entertainment sector since they are yielding more profits and making a global impact.

The popular artiste manager has joined the tall list of Ghanaian celebrities expressing disappointment following the Black Star’s defeat to Comoros in the AFCON game on January 18, 2022.

Reacting to the Black Stars’ early kickout from the AFCON race, he took to Instagram and wrote;

“It’s about time we stop wasting our taxes on sports especially football and invest solely in our music and hospitality sector. All the applause and accolades Ghana has out there in the world presently are owed to our entertainment and tourism industry. Hospitality and entertainment are high earners and healthy contributors to the country’s GDP. Stop the foolish investment in football now! Invest in the arts. #DependOnGod #sikanhyiraadomaseda.”

Meanwhile, other Ghanaian celebrities have also listed several factors that attributed to the poor performance of the Black Stars team.

Politics, incompetence on the part of players and the coach among others were cited as the major factors for the team’s abysmal performance.