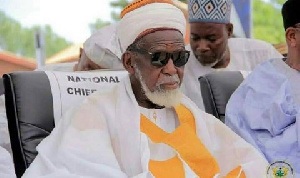 Tell the youth to find something better to do with their lives, Chief Imam to Imams

Two rival groups face-off on the streets of Nima

The National Chief Imam, His Eminence, Dr Osmanu Nuhu Sharubutu, has charged Imams in various communities to guide and educate the youth to find something better to do with their lives rather than engage in violence.

According to him, this sermon should be preached every Friday at the mosques when congregants gather to pray, as he believes this will encourage the youth to eschew violence.

His comment comes on the back of the violence that erupted at Nima on January 18, 2022, amongst the youth.

Speaking at a meeting with the 16 regional chief Imams, he expressed disappointment in the actions of the youth.

“We express our disappointment and express our condemnation that what happened is not in accordance with the teaching of Islam. We call on the Muslim youth in Accra, Mamobi here and across that we must all uphold the principles of respect for human blood and sanctity of human lives. We want to say on behalf of the eminent chief Imam, we call on all Imams to make it a subject on sermon on every Friday, guiding and educating our youth to find something better to do with their lives,” he charged.

Describing the incident as an eyesore, the Chief Imam called on the chiefs of various communities to encourage the youth to sustain peace.

“Similarly we call on all chiefs in our communities to also use this occasion to strengthen the result to continue to use our culture and tradition of peace. We encourage our young people to eschew violence, idealness and not be used by anybody to foment trouble. What happened yesterday was an eyesore and we hope we will never see it happen again,” he said.

On Tuesday, January 18, 2022, violence erupted on the streets of Nima.

The incident that had machete-wielding young men take over the streets in a battle and others the firing of several gunshots, took the timely intervention of the police to avert an escalation of the already bloody situation.

The Ghana Police Service were able to contain the situation of which 7 people were arrested.

In a press statement, the Director of Public Affairs for the Police Service, ACP Kwesi Ofori, connected the genesis of the bloody conflict to a longstanding contention between two known gangsters in the neighbourhood.

“It is led by one Kumordzi alias Ibrahim Hussein and Baboon alias Awudu; they are rivalry groups that never agreed on issues and today they went all-out on the open streets of Nima,” ACP Kwesi Ofori describing the incident as gangsterism and mass violence stated.