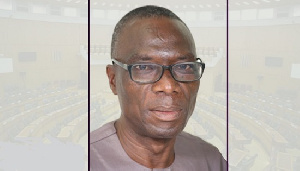 The Minority Caucus in Parliament has kicked against the implementation of the semester system at the basic school level as against the hitherto trimester system that was being run in schools.

In an interview with Accra-based Class FM on Tuesday, January 18 and monitored by GhanaWeb, ranking member on Parliament’s Education Committee Peter Nortsu-Kotoe indicated that the semester system was going to place a heavy burden on teachers and students.

He contended that the number of contact hours and the structure of the academic calendar will cause learning fatigue amongst students should the Education Ministry through the Ghana Education Service (GES) go ahead with its implementation.

“We find the semester programme being implemented at the pre-tertiary level as professionally wrong. Wrong in the sense that if you look at the ages of the students or pupils for whom this calendar is made, it does not help the academic work. How can a six-year-old child sit down from 7:30 to 7 pm every day for five months, 20 weeks? As teachers, research has shown that after the 10th week diminution of returns sets in.

“Students or learners become exhausted and fatigued and they are not able to absorb anything again. That’s why after the 10th week preparations are being made for revision and examination so that students can go home, rest and come back the following term,” Peter Nortsu-Kotoe argued.

The Member of Parliament (MP) for Akatsi North further argued that some school environment and infrastructure did not support an increase in teaching and learning hours.

He insisted that an implementation of long contact hours in such schools will have dire consequences on the health of pupils.

“If you look at the infrastructure in our schools, only a few them have proper furniture. There are schools in this country especially the rural areas where children take kitchen stools to school to use as school furniture and sitting in that position for five continuous months…what do you think will happen to the health of the child? Some areas we don’t have good classroom environment.

“The jurisdiction is poor, the classroom are dark and you want the child to be there for this consecutive number of months?…it is not going to help. The teacher himself needs time to prepare for lessons so if you ask the teacher to remain in school from 7:30 to 3:30…what time is he going to use to prepare for the next day and mark exercises that he or she will give to the students,” he stated.

The unions in a statement want GES to withdraw the policy pending further consultations on its implementation.

“We, therefore, call on the GES to immediately withdraw the policy, pending full consultations with the unions in education and other major stakeholders, and do serve notice that failure to do so will be resisted fiercely,” parts of a joint statement read.