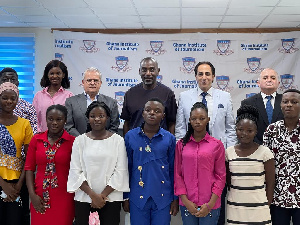 Journalism he says can be used to rally citizens towards national goals for equitable growth in all sectors and regions of the country.

He was speaking at a ceremony where the Lebanese Community in Ghana awarded scholarships to twelve brilliant students at the Ghana Institute of Journalism (GIJ).

The colourful ceremony was held in the presence of the Rector, the Dean of Students, the Registrar, a delegation from the Lebanese fraternity and other high ranking members of the institute.

All students who are currently studying journalism were drawn from Level 200, 300 and 400 of the institute.

The awards scheme which is in its 9th year forms part of the community’s social responsibility project and a means of promoting educational cooperation between Lebanon and Ghana.

Since 2013, it has supported schools like GIJ, KNUST and the University of Ghana. Through the initiative of the Ambassador, it has been extended to students in the School of Languages and the School of Performing Arts.

Ambassador of Lebanon to Ghana H.E Mr Maher Kheir stressed that investing in education to empower the human resource of any nation is the best investment.

This he explains, is the motivation for the Lebanese Community’s firm commitment to supporting Ghanaian students for close to a decade now.

He noted that the scholarship scheme has become recognised for the impact it has had on many individuals and families.

“The Lebanese Scholarship Program since its inception by the Lebanese Community in 2013, has gradually become one of Ghana’s finest scholarship schemes. It has received awards and recognition from top government officials, stakeholders in the education sector and the public” he said.

H.E Mr Maher Kheir, stated that the world has become a global village where nations are connected to each other. Thus, journalists must not limit themselves. Rather, they should be exposed to different cultures to broaden their scope to help national development.

“As journalists, you’re agents in social transformation. We believe a journalist should have a panoramic view of the world. So you have a sacred mission in our global village where cultures intersect” he stressed.

He added “We’ve seen the power of journalism in this COVID-19 era where it has been key in reaching the unreachable with information. Journalism challenges stereotypes, breaks myths, defends truth and empowers people to make meaningful contributions to society.”

He challenged the beneficiaries, ‘see yourselves as envoys of this prestigious profession and give off your best as we continue to support you to shine.”

Rector of GIJ, Professor Kwamena Kwansah-Aidoo intimated that the devastating effects of covid-19 has brought untold hardships on many families.

He also noted that Lebanon as is currently going through severe political and economic distress which has affected its citizens the world over.

He, therefore, lauded the Community for remaining committed to the students despite the numerous challenges facing Lebanon at a critical time in their history.

“After receiving this support for many years, it is easy to take it for granted. But these are very difficult times especially for Lebanon who are going through a tough time as well. For this reason, we refuse to take this gesture for granted” he noted.

He promised that the School will continue to support the Community in delivering such humanitarian gestures as well as uphold high standards of learning to produce the best communication and media practitioners to boost development.

A beneficiary Samuel Nyigmebo, said the scholarship would ease the financial burden on their families and boost academic performance exponentially.

He thanked the donors and promised that the beneficiaries will work hard to justify the confidence reposed in them.

A member of the Lebanese Community, Mr Ashkar Naaman pledged their continuous support for the scheme.

He emphasized that they will not stop but rather explore the possibilities of expanding it to help more Ghanaian students.