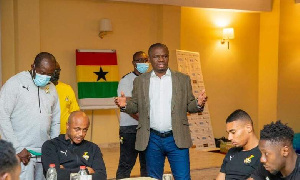 The Ministry of Youth and Sports has summoned the Ghana Football Association to explain the cause of Ghana’s poor display at the 2021 Africa Cup of Nations.

The Ministry in a statement described as ‘abysmal’ the performance of the team and demanded immediate answers from the GFA.

The meeting according to the ministry is to hold discussions on how turn around the form of the team and improve the performance.

The Ministry emphasized that adequate measures were put in place to ensure that the Stars had the best of preparations and comfort.

“The entire country is extremely disappointed by the abysmal performance and early exit of the Black Stars from the ongoing 2021 Africa Cup of Nations in Cameroon, and the Ministry of Youth and Sports shares in the nation’s sentiment,” portions of the statement read.

“With the government providing the team all the needed logistical and financial support including resources for preparation and participation in the qualifier stage to the tournament and eventually a pre-tournament camping in Qatar, the ministry is particularly disappointed in the team’s performance,” it added.’

The Black Stars were knocked out of the AFCON after losing 2-3 to Comoros Island in the final Group C game of the 2021 AFCON.

The Black Stars exited the tournament with just a point, winning none of their Group C games.