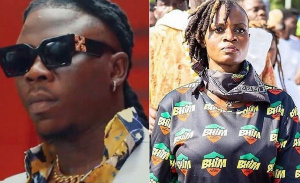 Music investor, Ayisha Modi, popularly known as ‘She loves Stonebwoy,’ has admitted that her relationship with the BHIM Nation camp is currently on life support.

Ayisha Modi has described as despicable the level of disrespect she has received from some individuals in the BHIM Nation camp, when all she has done was to stick out her neck for the dancehall artiste on so many instances.

Ayisha said it is the case that people young enough to be her children, have mastered the audacity to disrespect her, adding that she would no longer put herself in that position.

The ‘die hard’ BHIM Nation fan made these comments when asked to explain what her relationship with Stonebwoy currently looks like.

Delving into the matter, Ayisha disclosed that she has refrained from actively supporting Stonebwoy, adding that the insults that come with it are not worth receiving.

“If it wasn’t for Stonebwoy, you’d never hear me speak. All the noises I have made and the battles I’ve fought on social media were for Stonebwoy’s sake. It got to a point where even people who are young enough to be my kids and below my standard were insulting me. Stupid and useless people were insulting me and it’s just too much. So I decided to take some steps back.

“There’s nothing happening between myself and Stonebwoy. We did not sign any working agreement whatsoever. Everything I did for him, I did it out of support for a brother. It’s not like I’m even on his payroll or something. If things are going on and you begin to witness some disrespect, it’s very worrying and all you need to do is to hold back. People around Stonebwoy were disrespecting me and it’s very despicable. I’d rather not even speak about it. As for Stonebwoy himself, I don’t have a problem with him. If he says he doesn’t have a problem with me, let’s leave it at that,” Ayisha Modi stated in an interview with SammyKay and monitored by GhanaWeb.

A search by GhanaWeb revealed that Ayisha Modi has for the past months not made any post about Stonebwoy. This was after reports were rife that they had unfollowed each other on Instagram.

Unclear what necessitated the move, some social media users are of the view that perhaps Stonebwoy intends to detach his brand from Ayisha’s fierce and controversial personality.

What broke the camel’s back was her absence from the 2021 BHIM Concert, among others.