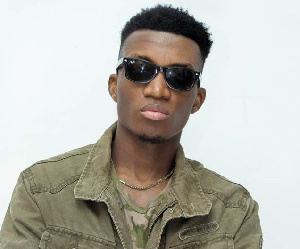 Kofi Kinaata praises his mum for her support

Kofi Kinaata reveals he wanted to play football or sing

Kofi Kinaata praises his mum for supporting his goals

Award-winning Ghanaian Highlife musician, Martin King Arthur, popularly known as Kofi Kinaata, has revealed that he harnessed his music career thanks to his mother.

According to the singer, he was very good at singing and playing football as a kid hence it was his mother’s desire for him to become either a musician or a footballer.

He made this known in an interview with Joy Entertainment and monitored by GhanaWeb.

“I am very happy because my mom told me at the age of six or seven, she told me she wanted me to sing or play football because I was a very good footballer and I’m singing now,” he said.

The artiste has been widely recognized for his creative Fante rap and freestyle, hence the title, the “Fante rap God” when it comes to modern Highlife music.

Meanwhile, the highlife musician has also revealed that he wants to impact society and his fans positively and advised that people do away with the negative perception they associate stars with.

“One thing I will say is that we have this perception that when you are singing, and it is not gospel, you have to behave someway, you have to drink some stuff, you have to be high on some level, but they will see me normal as Kofi Kinaata, dressed up like the way any normal boy will dress up, but I am the star,” he said.