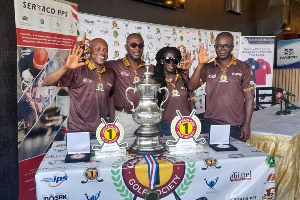 Mr. Pius Ayeh Appiah, Founder and President of Captain One Golf Society (C1GS), has stated that his organization exists to ensure that golf is made accessible to all.

According to him, golf has the potential of taking Ghana to higher heights in sports but unfortunately, many had tagged the game as that for the elites, therefore, it pushes interested persons away.

Mr. Appiah stated this during the media launch of the fifth Captain One Golf Society Charity Invitational Championship in Accra.

The fifth-anniversary championship would tee-off at the Royal Golf Club in Kumasi on Saturday, January 22 and end on Sunday, January 23.

The President said with this objective, C1GS, had over the last two years instituted a Junior Members Club through its Deprived Kids Golf Project.

He explained that the project is aimed at giving children the option to consider golf as a future profession and that their current members are drawn from the Angel of Hope Orphanage Care Home in Tarkwa and the Safe-Child Advocacy in Kumasi.

He said C1GS sees golf as a product that needs to be developed and promoted so they instituted the Founder’s Monthly Medal competitions that take place at the various Golf Clubs in the country.

He noted that they were using their platforms to ensure that people appreciate the full benefits of golf which include mental wellbeing, reducing stress and anxiety, weight loss, exercise and physical fitness.

Tournament Coordinator of the C1GS, Solomon Harvey, noted that before the commence of the game, the kids would have their turn on Friday, January 21 and would compete for the best put, longest drive and the best dressed.

He added that amateurs and professionals would play on Saturday and the best 60 scores from Saturday would proceed to play on Sunday.