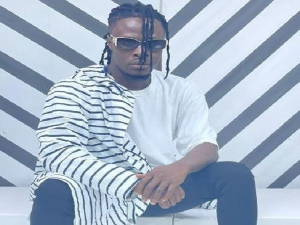 Fancy Gadam calls out the media

Fancy Gadam strongly believes that the media doesn’t appreciate the good songs produced by Ghanaian artistes, thereby failing to give them enough airplay.

This situation has resulted in foreign songs especially from Nigeria dominating the airwaves and killing talents. He has charged the media to constantly play their songs.

According to Fancy Gadam Nigerians do not play songs by Ghanaian artistes in their country; he, therefore, finds it unacceptable, the leverage being given foreign songs.

“Ghanaian artistes are doing the right thing. It is the media that don’t appreciate what we are doing, trust me. Stonebwoy, Sarkodie, Shatta Wale are part of the talented musicians, we have beautiful songs that every human being can relate to this songs if given airplay.

“When the media is feeding the fanbase with Nigerian songs, automatically, they are going to love it,” Fancy Gadam said in an interview on OnePlay Africa with Tilly Akua Nipaa.

The ‘Total Cheat’ hitmaker added that Ghanaian artistes need promotion from the media in other to sell their songs to the populace and also foreigners who visit the country.