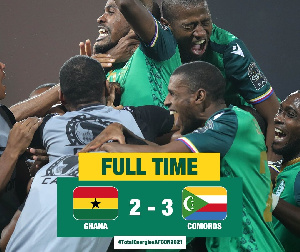 Comoros defeated Black Stars 3-2 in their Africa Cup of Nations final Group C match to knock Ghana out of the tournament.

It was a shambolic performance from the Black Stars from the onset as they conceded a goal 4 minutes into the game.

Minutes later Black Stars captain Andre Ayew was sent off after clashing with the Comoros goalkeeper in a 50-50 chance in the box.

However, after recess Ahmed Mogni made it 2-0 for Comoros in the 62nd minute to the shock of many Ghanaians watching the match across the globe.

It took substitute, Richmond Boakye-Yiadom to get a consolation goal for the Black Stars from a Daniel Kofi Kyereh corner kick.

There was a sigh of relief when defender Alexander Djiku equalized to make it 2-2 to put restore parity in the game.

With minutes to end the game, Comoros ended Ghana’s hopes of a comeback when Ahmed Mogni scored his second in the game to make it 3-2 for the Islanders.

It was the first time in 15 years Ghana exited the AFCON in the Group stages since 2006.