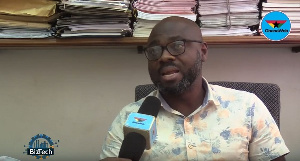 Fitch downgrades Ghana to B-

Check your expenditure, Economist to government

Claims by some Ghanaians and political opponents that Ghana is broke has been quashed by a finance lecturer at the University of Ghana Business School, Professor Lord Mensah.

According to him, a country that is broke has no ability to generate revenue for developmental purposes.

He added that in the case of Ghana, the problem is that government is unable to prioritize its expenditure to stay within an allocated budget.

Also, government invests in areas that do not really generate revenue for the country.

Speaking on the AM show on Monday, January 17, 2022, Prof. Lord Mensah said, “Ghana is never broke, a country that is broke has no ability to generate revenue. Now if you look at Ghana as a country, I would say that we are not broke but we are not able to prioritise our spending that is what is making it look as if the country is broke. We are not broke because a country that would be able to generate revenue of about 70 billion Ghana cedis, what makes it a broke country?”

“Government tries to put in measures that enhance revenue but then the only difficult thing is that government has not got the political will to look at the expenditure side. If you look at the expenditure side carefully, you will realize that there are some key areas that you may not want to touch and at the end of the day if you relate that to our revenue you may realize that more or less what we generate is not what we can spend, we are not doing that,” he stated.

His comment comes after credit rating agency, Fitch downgraded Ghana’s Long-Term Foreign-Currency Issuer Default Rating (IDR) from B to B-.

Fitch assumes Ghana will be unable to issue bonds on the international capital market this year and prospects for doing so in 2023 are uncertain.