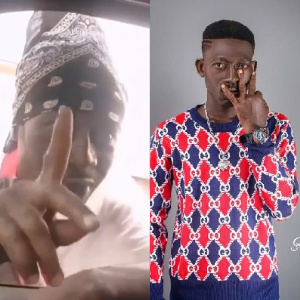 Ghana 2Pac refuses to detail what he used his money for

One-time Ghanaian rap sensation, Supa who was popularly known as Ghana’s 2Pac, has been spotted begging for money in traffic.

2Pac became popular after videos of his freestyle rap surfaced on social media, which shot him to stardom. But the fame was short-lived when the underground rapper faded out of the system the same way he came.

The Nima-based rapper has in a new video been spotted begging for one cedi from a netizen who recognised him and recorded the moment.

In several engagements with the Nima rapper, the netizen asked what he did with the money he made from his recorded songs, but Ghana 2Pac refused to answer, insisting on the one cedi he was requesting for.

It all started in 2018 when a viral freestyle by the Nima-based rapper was retweeted by award-winning rapper, Sarkodie and the catchiest part of the video chanted the words “F**k Gariba”.

Gariba, who is also a Nima-based rapper styling himself as the king of the streets of Nima, reacted to what he describes as the disrespectful comments by Supa.

The last time Supa was heard of was when in 2020 a random fan shot a video of him where he announced a comeback by throwing shots at Shatta Bandle saying his face like local rice.