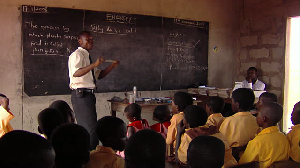 The GES will meet teacher unions this Thursday

The Ghana Education Service (GES) has scheduled a meeting with teacher unions on Thursday, January 20, to discuss the issues that have come up with respect to the new academic calendar for public schools.

A statement issued and signed by Cassandra Twum Ampofo , Head Public Relations Unit on Tuesday January 18 said “Indeed the Ministerial committee on schools calendar engaged representatives of the unions and school heads. However, we will continue to engage e the unions and other stakeholders if they have noted additional concerns since the release of the calendar.

“Subsequently, management has invited the unions to a meeting on Thursday 20th January 2022 to discuss the additional issues raised.

“Meanwhile, malmanagement wishes to welcome back to school all basic school teachers leaners, and particularly ‘My First Day at School’. 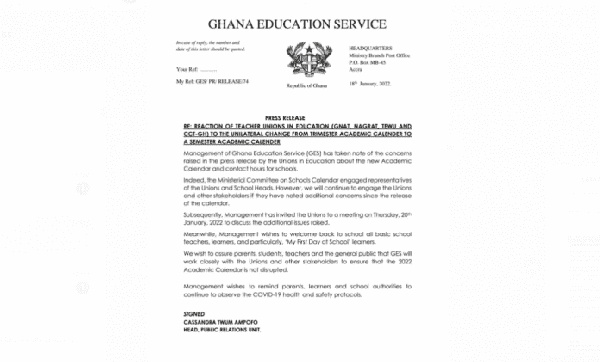 This comes after four major teacher unions raised reservations about the announcement by the GES of the new academic calendar for public schools.

According to the teacher unions, the Service failed to engage widely before making the announcement.

“The attention of the Unions in Education has been drawn to a document in the public domain purported to have changed from a trimester to a semester academic calendar by the GES,” the press release by the Ghana National Association of Teachers (GNAT), the National Association of Graduate Teachers (NAGRAT), the Coalition of Concerned teachers, Ghana (CCT-GH) and the Teachers and Educational Workers Union (TEWU) on Monday, January 17 opened.

“Such a major policy change should have attracted a wide consultation and therefore find both the pronouncement and the document offensive and takes exception to them.”

They adduced that the hours they are to work have increased exponentially, much in contrast to the dictates of their collective agreement.

“We therefore call on the GES to immediately withdraw the policy, pending full consultations with the Unions in Education and other major stakeholders and do serve notice that failure to do so would be resisted fiercely.”