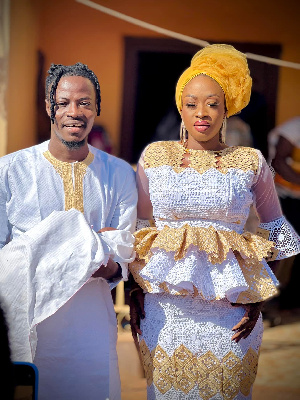 Fancy Gadem and his fiancé

The award-winning musician’s fiancé gave birth and he chose to name the boy King Kassim.

Confirming this on social media, he wrote: “Bless us richly with health, happiness and laughter. I am deeply grateful for this child and for all that this child represents in my life. My experience of life and my contribution to the world is changed forever and I am grateful. Thank you God. Welcome New King Kassim.”

It would be recalled that in 2018, MyNewsGh.com reported that the musician held an outdooring which he tried to conceal from many at Gurugu in the Sagnarigu Municipality of the Northern Region for his bouncy baby boy.

It has been established with incontrovertible evidence that Fancy Gadam has a ‘serious’ girlfriend who is a student nurse at the Tamale Nursing and Midwifery Training College for which reason he tried concealing the issue from many including close associates.