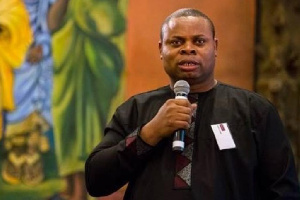 Over the past few days, notable organisations have predicted economic distress for Ghana, particularly this year.

The latest is that from ratings agency Fitch who recently downgraded Ghana’s long-term foreign-currency issuer default rating (IDR) to ‘B-‘ from B with a negative economic outlook.

Reacting to the development in a Facebook post, the IMANI Africa president said government must rethink its expenditure in order to sustain the economy.

“We all fall on hard times and need some support from family and friends…but Government has driven the country into a debt iceberg and we are sinking with fewer life boats and passerby ships that should care are simply smiling and waving at us…” Cudjoe wrote.

“We need to stop the debt clock by rationalising our expenditure plans and more…Meanwhile, government should talk to the IMF to help. We shouldn’t be shy at all,” he added.

Meanwhile, a senior lecturer at the University of Ghana Economics Department, Dr Adu Owusu Sarkodie has advised government to return to the International Monetary Fund for financial support.

Though he believes passing critical policy interventions such as the E-Levy, discount on benchmark values among others, will help address the country’s debt situation, he adds that a return to the IMF cannot be avoided.

Speaking on the Asaase Breakfast Show on January 17, Dr Adu Owusu Sarkodie explained that heading back to the IMF could somewhat offer the country some policy credibility.

“My final and most bitter option is to seek an International Monetary Fund programme. This is not something I want. I have never wanted an IMF programme for this country. In all my submissions, I haven’t been impressed with Ghana going to the IMF,” he stressed.

Dr Sarkodie continued, “…But any time we have gone to the IMF, there was the need for it. We mess up and we get ourselves into the situation where there is no way out except to seek an IMF programme. It is my third option and it is a bitter one.”