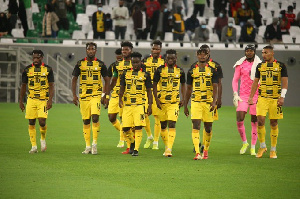 Aziz Haruna Futa, an executive of the New Patriotic Party has discounted the chances of the Black Stars to win the 2021 Africa Cup of Nations.

Aziz Haruna believes that it will take a dramatic turnaround for the Black Stars to make their way to the finals and win the competition.

He suggested in an interview with GhanaWeb’s Daniel Oduro that the handlers of the team should use the tournament as preparatory ground for the 2023 edition.

The former board member of Accra Hearts of Oak expressed disappointment in some big stars who have so far failed to light up the tournament.

It’s a game and anything can happen but I don’t see us winning this tournament but if it happens so then we have to thank Allah. We have to use the opportunity to build a new team for AFCON 2023.

Ghana come up against Comoros Island in the final game of Group C with the Black Stars needing a win to stand a chance of making the last 16 of the AFCON.