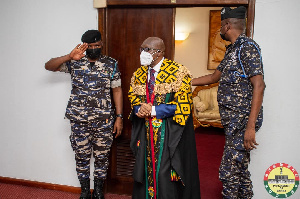 Alban Bagbin with some of his police guards

Speaker of Parliament, Alban Bagbin, has sufficient security by way of Police officers deployed to guard him and hence the uproar about a recent withdrawal of military personnel attached to his office is not necessary.

According to Hopeson Adorye, a failed presidential aspirant of the ruling New Patriotic Party, NPP, there is nothing indicating that Bagbin will be exposed to risks with the withdrawal because he drives around with ample security.

Commenting on the issue on the Monday, January 17, 2022 edition of The Dialogue programme on Accra-based Net2 TV, Adorye cautioned that Ghanaians needed to see through the mischief in how the opposition National Democratic Congress are approaching the issue.

“The issues to do with the Speaker of Parliament are very worrying and Ghanaians must open our eyes and be aware, because the NDC as a party and how they are handling issues in this country, I don’t think it is right.”

He stressed that Alban Bagbin is not special than previous speakers or anyone and that his security is in the hands of a specialized Police Unit stationed at Parliament.

“Someone who moves with two motorcades, the same ones that escort the President lead you. Look at his convoy. Is he not in just one car? So who are those in the long convoy? Are they his family members?

“Even the dispatch riders are armed security people, they have been sufficiently trained, what other protection does he need, is it that without the military he cannot be protected?” he quizzed jabbing the NDC for being against military intervention in the security of the house.

Adorye, who is Director of Operations for Fixing The Country Ghana stressed that he agreed with the fact that as a senior public servant, the Speaker needed a certain level of protection but chastised him for seeking to change existing arrangements used by his predecessors.