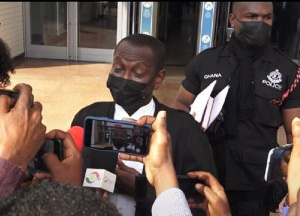 AG to go after corrupt officials

Deputy Attorney-General, Alfred Tuah-Yeboah, has revealed that the state will not shield any government official under the current or previous administrations who have done anything untoward to defy the laws of Ghana.

According to him, anybody found culpable of breaking the laws under any circumstance will not go scot-free as the state is ready to go after any and every individual guilty of such.

“We are trying to ensure that people account their stewardship, so if there is anyone that has also done something untoward against the laws of Ghana, we will not allow such a person go scot-free,” he told the media.

When probed further whether this decision affects everyone including current government officials, Mr. Tuah Yeboah responded in the affirmative, “Whoever! no exclusion,” he said.

He admitted that the case involving the state versus Ato Forson, others, is one of the many more cases to be brought to court.

Dr. Ato Forson, who is also the National Democratic Congress (NDC) Member of Parliament for Ajumako Enyan Esiam, and the Ranking Member on the Finance Committee of Parliament, has been charged with Sylvester Anemana, a former Chief Director of the Ministry of Health and Richard Jakpa, a businessman, for allegedly causing the state to lose money through the said deal between 2014 and 2016.