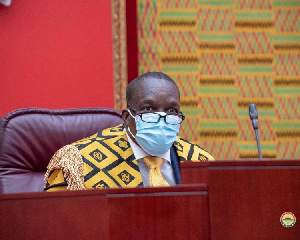 Over the weekend, the Military High Command of Ghana stripped the Speaker of his military bodyguards.

The guards according to a letter issued by the Ghana Armed Forces were assigned to the Speaker without the proper procedure.

The Ghana Armed Forces further indicated in the letter that the right procedures will now be initiated to assign new military bodyguards.

Speaking on Atinka TV’s morning show, Ghana Nie with Ekourba Gyasi Simpremu, Nana Obiri Boahen said the Military High Command should have engaged the Speaker ‘quietly’ for him to prepare himself and even make a choice if possible before being stripped of.

He noted that even if he was not a Speaker, Alban Bagbin “is a big person” in the country and that his security is paramount to the state.

“If indeed it is true that the soldiers assigned to Alban Bagbin have been withdrawn, I believe that it is appropriate and courteous that even on the quiet, he is called by the Interior Minister or whoever in charge. A Notice could have also been written to him and that will be fair, courteous and diplomatic but if we did not and it happened that when he slept and woke up the soldiers had been withdrawn, I think it is not fair,” he said.

He added that, “If truly you wanted to withdraw them, and he feels their withdrawal will affect him, you give him the opportunity or two weeks’ notice and tell him that now you do not want soldiers to come again and he may also say he does not want the police so he may look for retired soldiers.”