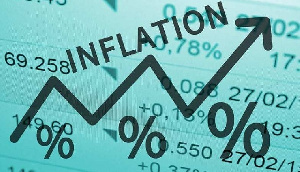 The year-on-year inflation rate for December 2021 marginally increased to 12.6 percent

Economist Dr. Patrick Asuming has estimated that Ghana’s inflation will spike in the coming months.

He opines that the situation could spell more doom if the ongoing debate over reversal on the benchmark value policy is not resolved.

In an interaction with Citi Business News, Dr. Asuming explained, “the cedi came under a little bit of pressure in the last quarter of last year. The local currency has been doing well for almost 18 months to two years but it appears it has come under a little pressure. But it’s likely that it’ll get worse before it gets better.”

“If we actually go ahead and withdraw benchmark value discount, we might see some prices going up further. So, it appears that we’re going to stay with high inflation for probably throughout the first quarter of this year. It might take a while before we bring inflation back under control,” he added.

The new inflation rate is however the highest recorded since the Service rebased the Consumer Price Index back in August 2019.