Ghana ends another year without a reigning world champion in 2021

Amo-Bediako’s suspension comes after refusing to pay a percentage of Commey’s purse he earned from his fight against Vasyli Lomachenko in December 2021 at the Maddison Square Gardens.

Commey was paid more than $750,000 from his fight against the Ukrainian boxer aside from sponsorship and Pay-Per-View.

As enshrined in the regulations of the GBA, boxers who fight outside the shores of Ghana are required to pay a percentage of their purse to the authority.

“In Article 18 under sanctions of the Rules and Regulations governing professional boxing locally and internationally which states; Boxers licensed by the Ghana Boxing Authority and fighting outside the country whether under the flag of Ghana or not are expected to remit a percentage (%) sum of their purse to their Authority, such percentage (%) amount will be determined from time to time by the Ghana Boxing Authority.”

However, Commey’s promoter has refuted to make payments of a specific amount from their purse to the GBA.

Reports gathered indicates that, the Streetwise Promotions boss told the GBA that Commey did not fight under the flag of Ghana hence his reason not pay any percentage to the local governing authority.

But in the statement issued by the GBA on January 14, 2022, Amo-Bediako “was banned after an action of disrespect and misconduct by himself and his boxer, Richard Commey in recent times towards the Ghana Boxing Authority in view of issues which he was cordially invited to come into terms of agreement with the GBA.”

The suspension will prevent Amo-Bediako and his Streetwise Promotions from organizing a fight for any boxer within or outside Ghana.

Read the full statement below 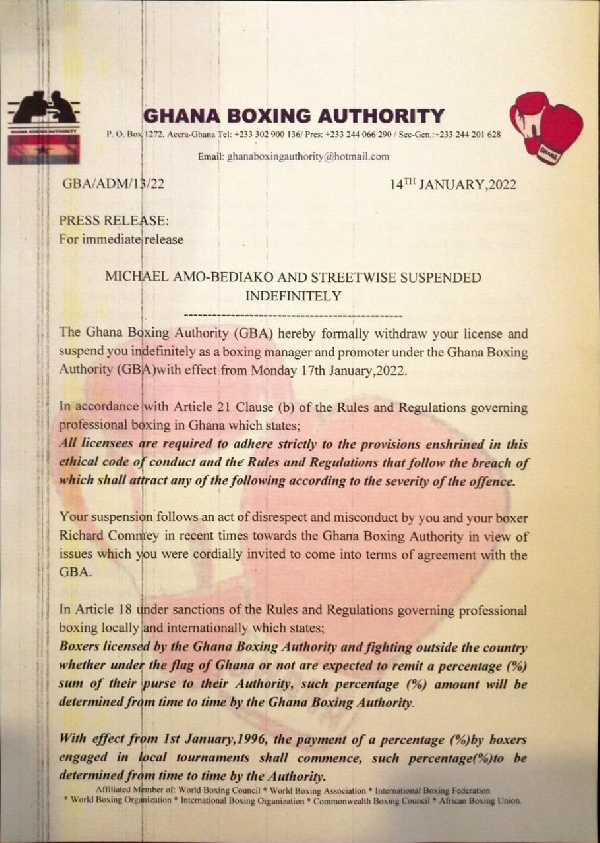