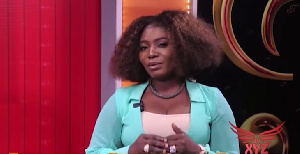 Florence Obinim talks about her husband

Forence Obinim refuses to criticize her husband, says God is the only judge

Wife of Bishop Daniel Obinim, Mrs Florence Obinim, has established that she will continue playing her role as a faithful and loyal wife until the end of the world.

Florence Obinim said despite the fact that people expect her to abandon her marriage due to the numerous scandals her husband has been involved in, nothing in this world can influence her mind.

According to Mrs. Obinim, it is not on her part to judge any human being, adding that everyone is responsible for his or her salvation.

Buttressing her point, she quoted the part of the Bible (Luke 17:34) that says; “On that night, I tell you, there will be two people sleeping in the same bed: one will be taken away, the other will be left behind.”

She continued that, “People don’t have a final say in my life. I don’t listen to hearsays or people’s verdicts about my life or about my family. The bible advised as to turn our weeping into rejoicing and that is what I always do. Everyone will be judged according to his or her deeds so why should I bother?

“On the day of rapture, even a married couple will be lying in bed together but one will be taken and the other will be left behind. If God who created you hasn’t judged you, then who I’m I to judge. The one you hate could be God’s loved one. I’m also the type of person who doesn’t let unnecessary things destroy my peace,” she stated in an interview with TV XYZ.

Mrs. Obinim added that she is God’s special gift to her husband.

“Every good woman given to a man was ordained by God. The bible says every good wife comes from God,” she added.

The General Overseer of the International Godsway Ministries, Bishop Daniel Obinim, has been one of the most talked-about pastors in the country.

From being arrested several times, to being accused of sleeping with his church members, Rev. Obinim has been involved in countless scandals in the country.