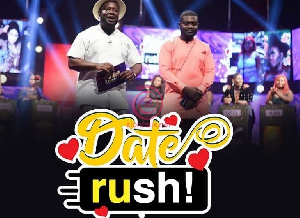 After the short break to make way for Ghana’s Most Beautiful and Mentox X Reloaded, Media General is back with what is expected to be another crazy, entertaining and mind-blowing season of their love hunt show, Date Rush.

The sixth season of the show is expected to be premiered tonight on the screens of TV3 and the various online media platform owned by the big media firm with Giovani Caleb and Anita Akuffo still as hosts.

TV3’s Date Rush is arguably one of the most viewed reality shows in the country, where men and women are paired after a short session of engagement and like all the previous seasons, viewers and patrons are expecting the best of fun.

Stick and stay with zionfelix.net, your most trusted source of celebrity news as we bring your a full view of the program which premiers later tonight at 8 pm.

As you wait, watch a snippet of the show this season below;