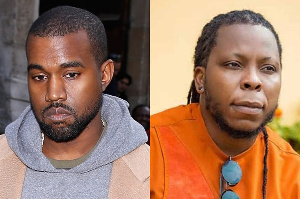 Ghanaian rapper, Edem, has prayed to God to increase the strength of American rapper, Kanye West who is going through a messy divorce with his wife, Kim Kardashian.

Kanye in a viral video alleged that Kim on Saturday, January 15 prevented him from attending his daughter’s birthday party.

But her father was not given the location of the party which had in attendance members of the Kardashian family.

Speaking in a viral video he said: “This is wishing my daughter a public happy birthday. I wasn’t allowed to know where her party was. There’s nothing legal that says…this is the kind of game that is being played. It has affected my health for the longest.”

Reacting to Kanye’s video, Ghanaian rapper Edem in a tweet sighted by GhanaWeb indicated that what the multiple award-winning rapper is experiencing is the worst feeling for any responsible father.

He wrote: “God help @kanyewest. Any responsible father knows what he is going through.”

Also, Kanye in a recent interview claimed that Kim Kardashian’s security prevented him from seeing his children who are now living with their mom on a different occasion.

“Earlier this week, Monday, when I went to go pick my kids up from school, the security stopped me at the gate…So at that point, security was in between me and my children and that’s what was not going to happen.”

Speaking on ‘Hollywood Unlocked” he indicated that nothing in this world, not even his career can keep him away from his children.