I am a born again Christain, Moesha Buodong declares

After almost 30 weeks since her last Instagram post, actress and socialite Moesha Boduong has declared the goodness of her Creator to her over 2.7 million followers.

The actress has for months been missing on social media after she announced her embracement of God somewhere last year.

But in a recent post sighted by GhanaWeb, Moesha seems to be back on social media. She shared an image that read: “God is King.”

The post barely which came barely twelve hours has generated close to 1,500 comments from followers who have indicated that she has been dearly missed.

The former socialite who was tagged as a “slay queen” due to her flashy lifestyle in 2021 rededicated her life to God and promised to forgo her “earthly” way of life.

She took down all photos and videos of herself that put on display her curvaceous body which she has admitted to having enhanced. 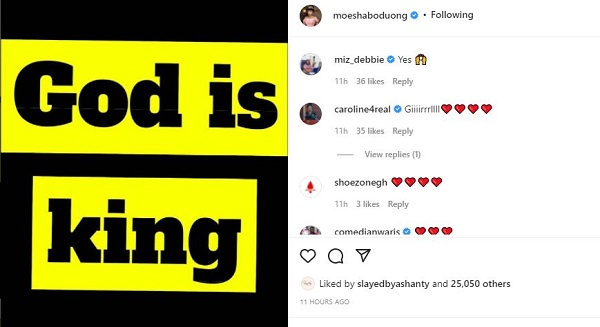