GAF says they were not assigned without proper procedure

It has emerged that the Speaker of Parliament, Alban Bagbin, made a formal request to the military high command before the four military personnel were deployed to beef up his security detail.

This comes in the wake of a document from the Ghana Armed Forces (GAF) directing the withdrawal of the soldiers from the office of the Speaker because they were assigned there “without proper procedure.”

A letter intercepted by GhanaWeb, dated January 21, 2021, under the letterhead of the Parliamentary Service and signed by Cyril K. O. Nsiah, Clerk to Parliament, suggests that the Office of the Speaker of Parliament, wrote officially to the GAF to specifically request for the four military officers.

Parts of the letter read, “with reference to our letter PC/CS/112/20 dated 18 January 2021, in respect of the aforementioned subject [re-request for attachment of military personnel] the Speaker has requested that 196624 S/Sgt. Adekurah Andrew be replaced with 193211S/Sgt. Apugiba Awine David of 1 Bn.

The four soldiers, therefore, are:

All other details remain unchanged. Please accept the assurance of high esteem,” the statement concluded.

GhanaWeb cannot confirm whether or not the GAF approved the Speaker’s request but the withdrawal of the military attaché suggests that the two institutions came into a compromise.

The Chief of Staff at the Headquarters of the Ghana Armed Forces, Major General Nicholas Peter Andoh, withdrew 4 military personnel attached to the office of the Speaker of Parliament.

The military indicated in a letter sighted by GhanaWeb that, the soldiers were attached to the Speaker ‘without proper procedure.’

“It is humbly requested that the personnel are withdrawn with effect from 14 January 2022 while efforts are made to regularize their attachment,” the letter stated.

The officers, WO I Jafaru Bunwura, WO II Apugiba Awine David, S/Sgt Agbley Prosper and Sgt. Bonney Prince have been serving Bagbin’s office since he became Speaker in January 2021.

Find below the letter from the Speaker to GAF. 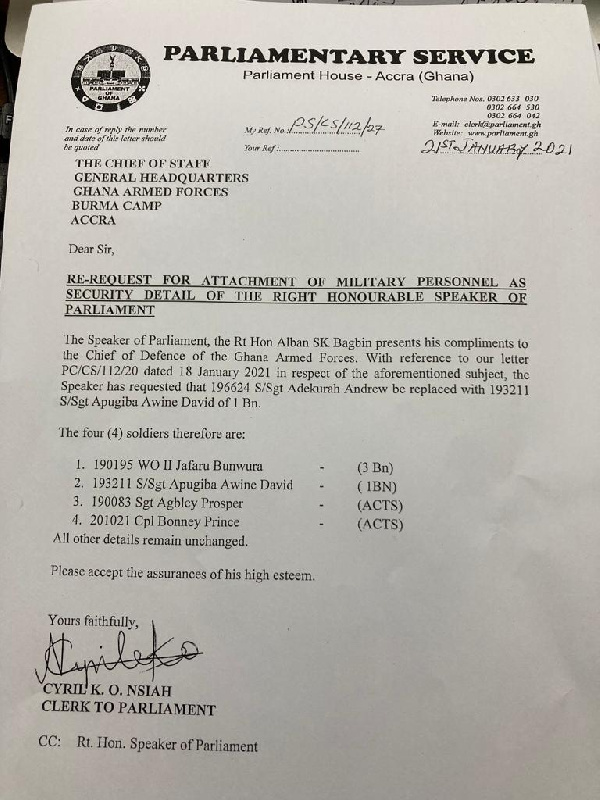