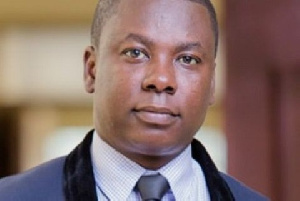 NPP Former Member of Parliament for Obuasi East constituency, Edward Ennin, has disagreed with comments made by the spokesperson of Dr Mahamudu Bawumia, Gideon Boako.

Dr Boako on his Facebook page waded into controversies surrounding a gentleman’s agreement between President Akufo-Addo and Alan Kyerematen.

Per the supposed agreement, Akufo Addo promised Alan in 2007 that he will take over from him after he completes his tenure as President.

Dr Boako, however, believes Alan “forfeited” it by running against then-candidate Akufo-Addo prior to the election of an NPP flagbearer for the 2012 and 2016 polls; thus the agreement no longer holds.

“So I go into a contest with you. I get more votes than you but not sufficient enough to secure me the required 50% plus 1. You came next to me and instead of a second-round contest, you concede to me. That’s nice. I acknowledge you in my acceptance speech and in order to ensure greater unity, I indicate that you will come after me…Instead of keeping to the commitment of conceding to me to go again so you can come after, you contested me. I lost and decided to go again and there again you did not concede to me but contested me,” he explained… Once you do this, you have withdrawn the commitment you made to me. Should the assurance I gave you still hold even after you subsequently withdraw your commitment to me on two separate occasions? Once you withdraw your commitment the consequential assurance from me also stands withdrawn,” he wrote on Facebook.

But Edward Ennin has questioned the temerity of Dr Bawumia’s spokesperson to pass such comments.

He wondered if Dr Boako was commissioned by the President to make those divisive remarks.

“It’s because of things like this that’s why I’m losing interest in politics…Gideon Boako was once sympathetic to Alan’s cause but now because of personal interests, he’s shifted camp..methinks its one of the cheapest means of making it…..in Africa because of our stomachs and what we will eat it’s difficult to speak the truth…who is Gideon Boako to make such comments?….it’s a video gone viral and we all heard the promise of Nana (the president)….does Gideon now speak for Nana or he was sent by President Akufo-Addo (to spoke to this matter)?….other than that I don’t understand what he is talking about…so because the person contested Akufo-Addo two times the agreement no longer stands? Gideon should know that we believe in the tradition in the NPP…” he said in an interview on Neat FM’s Me Man Nti programme.

Listen to him in the video below: