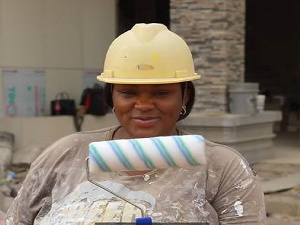 I have been painting houses for 16 years, Maryam Christopher reveals

A Nigerian female painter, Maryam Rita Christopher, popularly known as Chubby Painter Nation has recalled how her former boyfriend jilted her due to her job.

According to Maryam who has 16 years of experience in painting buildings, she was not willing to leave her job for the man who described painting as a ‘dirty job’ for women.

“Someone wanted to marry me but when he found out that I was a painter he said it was a dirty work so he can’t marry me. After informing me about his decision I just accepted it in good faith. I told myself that I will not stop,” said Maryam Christopher in a BBC News Pidgin interview.

This hardworking woman finds her job, which is mostly dominated by men, as ‘very easy’ due to the love she has for decorating homes.

Maryam is determined to make a name in the construction industry and rub shoulders with the world’s best painters. At the onset, friends and loved ones “avoided her” due to her job but that never discouraged her.

“My hustle is to paint ad decorate houses in Abuja and nationwide. When I was a little girl, I adored painting. I loved drawing and painting. I decided to venture into painting at a time where I was waiting for my SHS admission… that was how it all started. I have been painting for the past 16 years,” she added.

Chubby Painter from time to time has to deal with critics who allege that she sleeps with men for big contracts.

“This work has exposed me to so many places and people. I get a lot of advances from men but that has not distracted me… some people give me work because I am chubby and able to carry my body. Now the love is coming from all angles. All I want is to win, nothing more, nothing less. Some people say I sleep with men to get work because they don’t understand why I get big contracts,” she revealed.