A Plus lambasts Psalm Adjeteyfio

Psalm Adjeteyfio doesn’t deserve support from Ghanaians, A Plus

Singer and politician, Kwame A Plus, is the latest to call out veteran actor, Psalm Adjeteyfio aka TT, over his chronic begging and what he describes as a sense of entitlement for support from Ghanaians.

A Plus believes that the actor does not deserve public sympathy as he has proven that he doesn’t value all the help given him.

“You are a motivated beggar with a sense of entitlement!! I’m always the first person to mobilize support for people in need but you, even the one you have, if I get the opportunity, I’ll take it from you. You don’t deserve any help my guy!! Instead of sitting at home with that stinking sense of entitlement and granting interviews, use that sweet voice and eloquence to host a radio show to get paid monthly,” read his Facebook post dated January 14.

Psalm Adjeteyfio famed for his role played in the local television series, ‘Taxi Driver’ has for years, been appealing for financial support from the public as he has openly declared that he is broke.

Back in 2021, TT in an interview disclosed that he was facing ejection from his rented house over failure to pay for his rent. He also appealed for support to foot his medical bills.

Days after his interview, benevolent Ghanaians touched by his story donated cash and other items to him.

A tall list of donations came in from celebrities in the country including talent manager, Ayisha Modi who claims that the money he gave TT is equivalent to someone’s total annual salary.

But nearly four months after receiving such huge sums of monies including an additional GH¢40,000 from the Office of the Chief of Staff, TT in leaked audio was heard begging for leftover food from the kitchen of television presenter, MzGee who had earlier solicited for funds from Ghanaians on behalf of TT.

A Plus in a lengthy post on Facebook admonished Ghanaians to instead donate monies to the less privileged in society, not to Psalm Adjeteyfio, who he tagged as a “motivated beggar”.

“TT has made his head like 207 bus Very f@ckn man!! Chief of staff, Mama Frema gave you 40 thousand Ghana cedis, that is 400 million old Ghana cedis. You told Berima in an interview that she gave you 4 thousand. No problem. 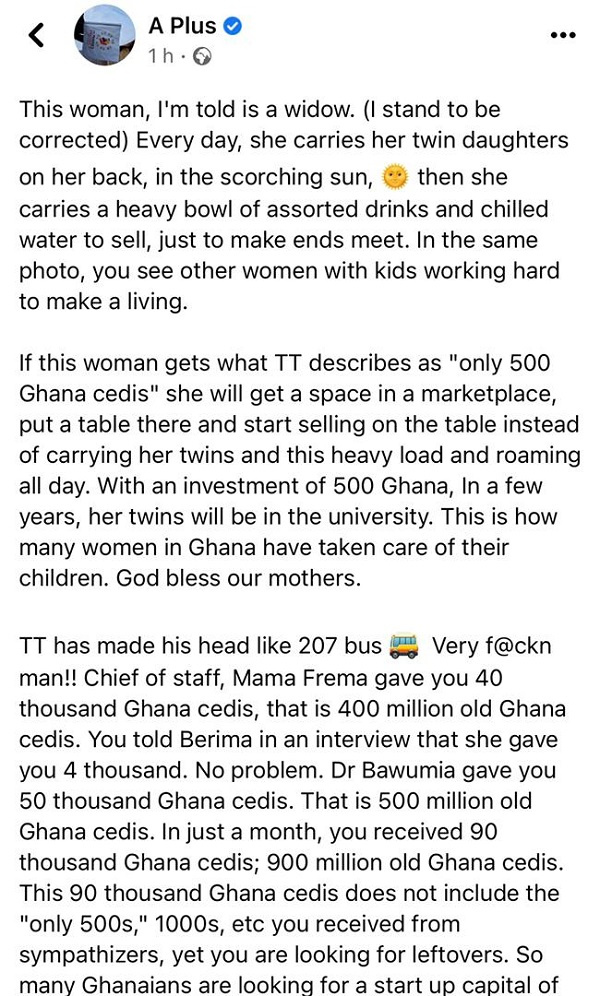 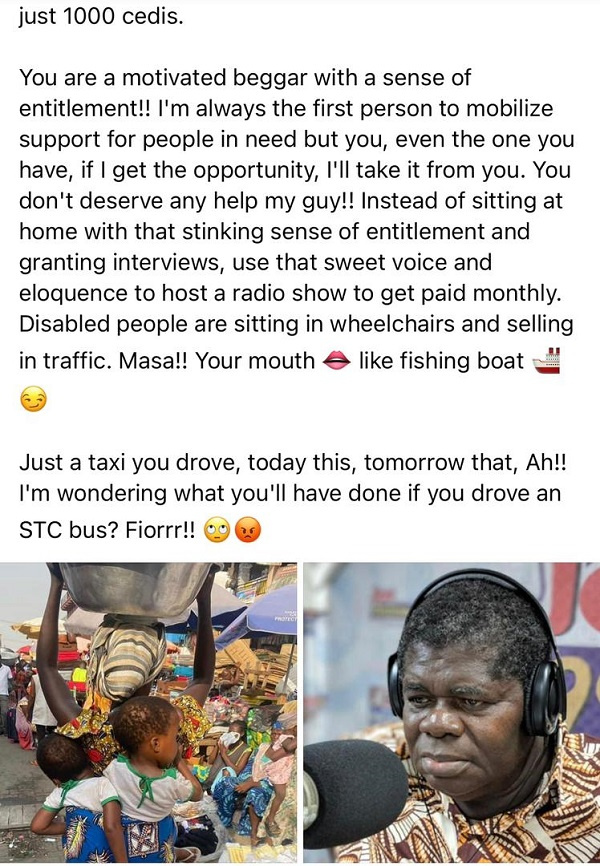