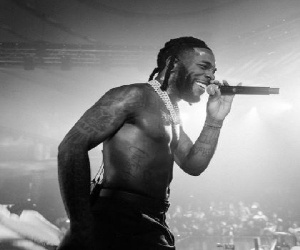 Music lovers described the move as a big win for Blacko who has a song with the Grammy award-winning artiste from Nigeria.

The highlight of the show was when Burna Boy welcomed on stage the only Ghanaian billed to perform at his end-of-year concert. Also known as the African Gaint, Burna Boy instructed the crowd to give the young rapper the biggest cheers as he walked on stage.

Burna who was captured in black leather pants charged: “Before we introduce this one, I told you guys on my Instagram to learn this shit. So, I need you guys to give the most energy that you’ve never given. We are going to turn this place upside down. We are going to be jumping and pushing each other. Make some noise for Black Sherif, let’s go.”

Black Sherif known for his hit single, First Sermon and Second Sermon in December 2021 featured Burna Boy on the remix of Sermon Sermon which made waves in Ghana and Nigeria.

Following the release, Burna Boy promised to take Blacko on his next tour and also encouraged his fans worldwide to learn the lyrics of their song.

“@BlackSherif is coming on tour with me. Second Sermon remix featuring me (Burna Boy) out now!! You better learn the whole song before coming o any of my shows. Yes that includes the Twi (A Ghanaian Language) parts. Thanks. Love….Damini,” Burna Boy wrote on Instagram.

Watch the performance below: