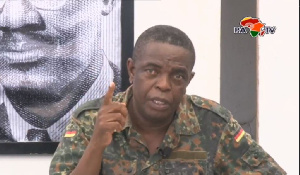 The NPP is selectively applying its iwn laws

The party is gearing up for key national and flagbearership polls

Kwesi Pratt Jnr, the Managing Editor of the Insight Newspaper, has accused the ruling New Patriotic Party, NPP, of favouring some candidates over others in its decisions relative to support for purported presidential aspirants.

In comments that looked to suggest that Vice President Mahammudu Bawumia had become the beneficiary of an unfair application of the party rules, he questioned why supporters of other aspirants were punished with suspension and dismissals but Bawumia’s backers were ‘absolved.’

He cited the NPP’s November 2021 conference where he observed that Bawumia’s supporters who he described as an army of Ashanti MPs had walked him into the venue and gone on to openly support his yet-to-be declared bid but that they had all ‘escaped’ punishment.

“If you look at what happened in Kumasi, the conference or congress of the New Patriotic Party, it speaks volumes. There are some who are saying that the sitting Vice President is benefitting from incumbency, I think that is false.

“Because if you look at what happened in Kumasi, he was followed by an army of Ashanti MPs, how is that related to incumbency?

“And then after following him… some of them actually made public statements to the extent that the sitting VP has won Ashanti, that the fact that he is followed by Ashanti MPs mean he has won Ashanti.

“At the same conference, Boakye Agyarko and supporters stopped. We are still not clear why Alan was absent there, there are stories out there.

“All of this does not convey the picture of a level playing field. That there is some sort of manipulation intended to favour one particular candidate and I think it is unfair,” he stressed for NPP which he described as a public organization seeking power and to the extent that the party can win elections and become managers of lives and future of Ghanaians.

President Akufo-Addo is in his second and final term of office and the NPP is gearing up to elect a candidate for the 2024 Presidential elections.

Akufo-Addo is on record to have warned all aspirants to desist from allowing their aspirations to negatively impact the delivery of the government’s mandate.

The party has also cautioned against any form of campaigning in respect of the next flagbearership elections slated for sometime next year.