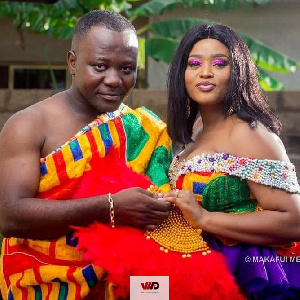 Raymond Aquah and his wife, MzGee

He made such comments while questioning why Gideon Baako would send people to plead on his behalf if indeed he claims to be innocent.

Earlier, Gideon Baaako, who MzGee accused of circulating Psalm Ajeteyfio’s audio which was sent to him in confidentiality, denied all of such claims.

In a long Facebook post, Gideon Baako said he never shared the audio and alleged that when the audio was sent to him by MzGee’s husband, he (Raymond) informed him that his wife was already working on a story about it.

“Where from this needless rant from MzGee. I don’t know you and have never dealt with you in my private or public life. It is your husband that I have a working relationship with because of the work I do. Your husband shares an audio with me in which a voice similar to that of the famous TT is speaking to someone (known to be you). Listening to the audio for the first time I struggled to understand what it was meant for. Your husband graciously explains the import of it to me in a telephone conversation to the effect that TT had alleged that he is being denied support because of the assistance from the Vice President and some other people including the greater Accra regional minister. I told your husband that cannot be correct and therefore he should not publish the audio and I will delve into the matter. As at the time, your husband made me understand you had done a story on it but he is going to ask you to put it on hold. I thanked him,” parts of the earlier statement from Gideon read.

MzGee’s husband in a sharp rebuttal to Gideon’s comments has denied telling Dr. Bawumia’s aide that his wife was writing a story on the actor’s voice note.

“I am absolutely certain no such statement came out of my mouth. She was right by my side during that conversation with you and when you asked me to share the voice note with you she gave me the green light. At no point in that conversation did I suggest to you that she or I was writing a story on the voice note. Since we agreed nothing on that voice note cast any bad light on your office why will you seek to stop its release or thank me for not writing a story on it?” MzGee’s husband earlier said.

In a new twist to their back and forth, Raymond has once again taken to social media to tackle the vice president’s aide.

“Frankly I am now convinced your claim that you did not share the voice note is very doubtful. Because in all these conversations you have been anything but honest. First you write and suggest we have written a story and intended to leak the voicenote and contacted you because of that now you claim I said she had penned down something. Assuming without admitting that there was indeed any story written or penned down what part of that TT voice note incriminates you or the Vice President that I needed to ask her to put it on hold.

“And why will you thank me for purportedly asking my wife to suspend writing a story on this voice note when the only reasonable story will be one that says your office has delivered as TT said. If you truly believed the only reason for taking this down would be because “we go along away” why did you not do it. You call and pretend you are remorseful then send people to come beg me to let it go then on the other hand you unleash your goons on me. If this is not dishonesty what is it! I do not have at my disposal the resources of the state or the well-oiled communication team you sent out there to spread the statement laced with wicked lies just after telling me you will pull it down after I pointed out the untruths and inconsistencies in it. And yes I have no doubt you,” he wrote. 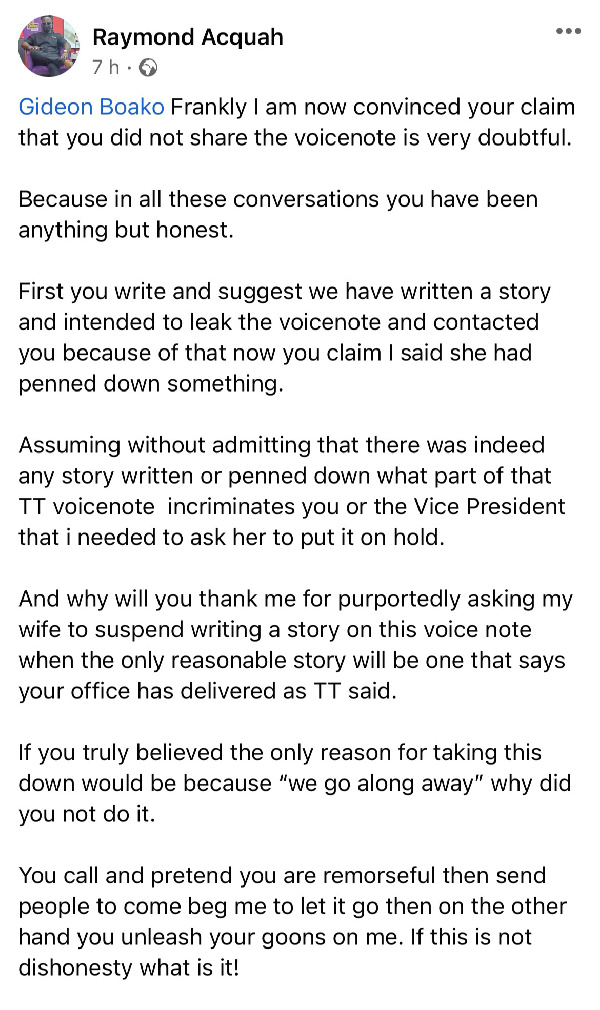 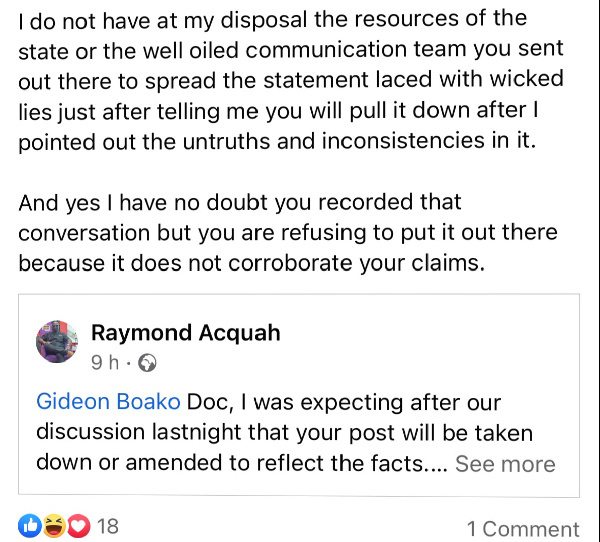