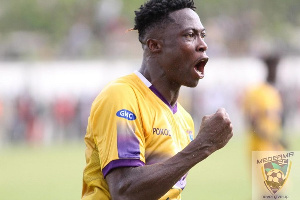 Midfielder Justice Blay will be playing his last match for Medeama SC on Monday when they face AshantiGold SC in the Ghana Premier League.

Justice Blay whose contract with the Yellow and Mauves will be ending on January 18, 2022, will feature for the club for the last time at the Len Clay Stadium in Obuasi.

The defensive midfielder has already agreed personal terms to rejoin giants Asante Kotoko SC when the next transfer window opens.

Blay played for the Porcupine Warriors on a season-long loan from July 2019 to June 2020 where he became fans favourite following an outstanding spell.

Kotoko couldn’t reach an agreement with Medeama for the permanent signing of the player hence his return to the Tarkwa based club.

Blay made 16 appearances and scored three goals for Medeama in the Ghanaian top-flight last term before suffering an injury which kept him out of the rest of the season.

He has played 6 matches in the current campaign and has scored once in the process.