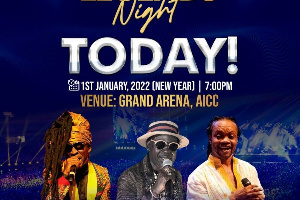 Kojo Antwi, who is arguably one of the best stage performers in Ghana, was amazing on the night, delivering a scintillating live band performance reverberating his accolade as the ‘Music Man’.

Kojo Antwi delivered stunning performances of some hit songs including ”Sika Dam”, ”Ma Enaada Me”,”Odo Anu Wappi”, among others creating an atmosphere of love among audiences.

Amakye Dede who popularly referred to as the ”Iron Boy” during his turn on the stage was rock solid with his performance, keeping the entire crowd on their feet with some hit songs.

Amakye Dede was certainly the showstopper on the night as he thrilled fans with some amazing stagecraft in one of his best performances in recent times.