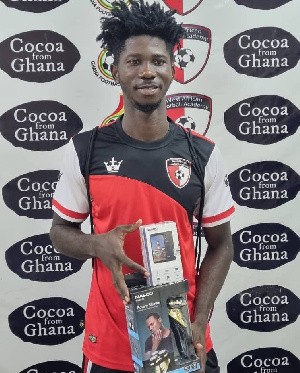 WAFA captain, Konadu Yiadom, was picked as Man of the Match in Sunday’s 2-0 win over Elmina Sharks at home.

The center-back put in one of his best performers to catch the eyes of the selection panel head by the Match Commissioner.

He even found the back of the net in the second half but the goal was called back due to an offside call.

The Academy Boys opened the scoring on the stroke of halftime when striker Justus Torsutsey converted a spot-kick.

This was after Sampson Agyapong’s goal-bound attempt came off the hand of a Sharks defender.

Six minutes into the break, WAFA doubled their lead through Agyapong who went on a solo run.

The No.10 collected a pass from Emmanuel Agyemang Ofori and entered the box before nutmegging the goalkeeper.

Sharks did not go down easily and were competitive but were denied by some brave goalkeeping from Boliver Sarfo.

The WAFA goalkeeper was really on top of his game and had to stop a 90th-minute penalty to deny Tahir Mensah.