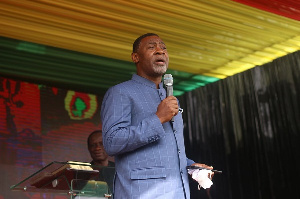 Founder of the Worldwide Miracle Outreach, Dr. Lawrence Tetteh has bemoaned what he says is the rather unfortunate state Ghana has found itself in.

According to him, humility has now become almost absent whilst pride and arrogance have taken over the leadership and citizens of the country alike.

In his last message to his congregants for the year 2021, the preacher emphasized the need for all and sundry to recognize that whatever positions they may be occupying today may be fleeting and hence should exhibit humility accordingly.

He castigated persons of leadership who speak and act selfishly and arrogantly owing to the power they think they wield, whilst reminding such persons that everything has an endpoint.

“…The nation is not humble, we’ve become so arrogant, as if there is no tomorrow as if there’s no God. People talk as if they have everything, forgetting that whatever power they hold today is transient.

“Don’t take advantage of your position. A lot of people are taking advantage of their positions today. I’ll show you where power lies – Be humble, because every position you have today, the Lord will have me say to you, it is transient.

Citing the Biblical Verse, 2 Chronicles 7:14 which says, “if my people, who are called by my name, will humble themselves and pray and seek my face and turn from their wicked ways, then I will hear from heaven, and I will forgive their sin and will heal their land’, Dr. Tetteh said Ghana is in its current situation of hardship because its citizens are not seeking the face of God.

“Even though we parade ourselves as religious people, we have forsaken this instruction. The Lord wants me to speak to Ghana that if we want Ghana to be well, we need to reconstruct ourselves again,” he said.

Watch the full video below: