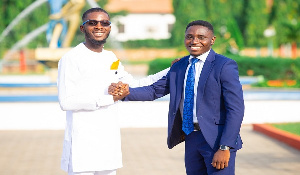 A presidential candidate in the 2021 University of Ghana SRC elections, Samuel Amos Ofosu, popularly known as Nana B, and his running mate, Alfred Acquah, have accused management of the school of breaching the SRC constitution.

In a petition to the Dean of Students, the two described the University’s Academic Board’s intervention in the transition impasse as a breach of the UGSRC constitution.

“In full cognizance of the authority and functions of the academic board, it lacks the capacity and the locus to assume their recent position. Section 17 and 18 of the University of Ghana statutes is clear on the academic board and their mandated functions. Those functions do not include settlement of UGSRC electoral disputes,” part of the petition reads.

They also indicated in their petition that the Academic Board’s directive to the Dean of Student Affairs to the effect that he supervises the swearing in of Stephanie Naadu Antwi and Daniel Obeng Asamoah as interim SRC President and SRC Veep respectively is a “travesty of the UGSRC Constitution.”

They also contended that the “academic board erred in the interpretation they sought to give to article 24 (8c and d) of the UGSRC constitution.”

“A careful read of those constitutional provisions so referred to, will educate everyone that the powers of those provisions will suffice and the treasurer were duly and substantively elected and as such are not facing and impeachment trials,” they explained.

“We acknowledge the fact that there is a chain of command in every institution, but we also must respect the offices that are legally mandated to perform certain functions and carry out some responsibilities. In accordance with section 38 of the University of Ghana statues, the Dean of Students Affairs is enjoined to among other duties, provide leadership to the SRC and in situations such as this, we wish to see the office of Dean of Students’ Affairs leading the charge,” the statement continues.

The petitioners want the Dean to take action over the matter and have vowed to “explore every means to demand justice” if injustice is done.