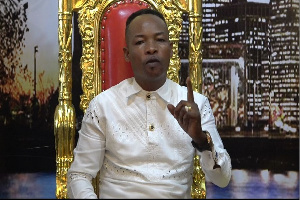 Archbishop-elect Salifu Amoako is the Founder of Alive Chapel International

You can’t tell us not to prophecy, Salifu Amoako

Salifu Amoako says his work as prophet is professional

With the battle between the locus of the Ghana Police Service, led by the Inspector General of Police, COP Dr. George Akuffo Dampare, and prophets in the country still raging, Archbishop-elect Salifu Amoako has challenged the IGP to why he thinks he can control what they do as prophets.

He explained that what is a fact is that even before the IGP came into office, prophecies had always been in vogue and it is not his administration that will change that.

Besides, he stated that there is the need for people to know and hear from God on what He is saying especially when Ghana is a Christian country.

Speaking during his first Sunday of the year 2022 service at his church, the Alive Chapel International, Archbishop-elect Salifu Amoako added that what they do is professional work, just as the police do and as such they should not be told how to do so.

Also, he questioned how it is that the police think they can control what prophets do when it is taxpayer’s monies, including his, that pay them.

“Do you know I pay tax? It is my taxpayer’s money that pay the police. So, the police is a profession so as is the work of God. Prophetic work is a calling and is a high-calling professional work so you cannot tell somebody the way he should prophecy,” he stated.

The Ghana Police Service had, ahead of the December 31, 2021, all night services to be held in churches across the country, warned against prophets who would seek to plant fear in people through their prophecies.

“It is also a crime for a person, by means of electronic communications service, to knowingly send a communication that is false or misleading and likely to prejudice the efficiency of life-saving service or to endanger the safety of any person,” a statement Ghana Police Service said.