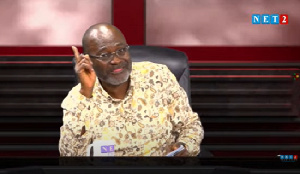 Kennedy Agyapong confirms having surgery to remove a brain tumor

The surgery was done in the United States

Kennedy Agyapong, the Member of Parliament for Assin Central has addressed issues around his health months after he underwent surgery in the United States of America.

According to him, contrary to reports that he had suffered a stroke, he underwent surgery to remove a tumor in the left side of his brain while in the United States during the last break of Parliament.

Addressing his health issues in a December 30, 2021, interview with a local radio station in his constituency Assin Fosu, he further revealed that it was a CT-Scan undertaken at Lancet Lab at East Legon that alerted him to the tumor.

The vocal lawmaker and business mogul also spoke about the cost of the surgery which he said was US$283,000.

Agyapong stressed that prior to the scan and medical advice, he had been hale and hearty and had undergone all his routine annual medical examinations.

He said the CT-Scan was triggered by a bathroom accident in which he knocked his head leading to a severe headache.

After the scan results, he travelled to the United States for a second opinion and medics confirmed that it was best to undergo the procedure to remove the tumor as quickly as possible.

Agyapong also spoke about his philanthropic and social support activities within the Constituency among others support for widows, the elderly and the award of scholarships.

He also recently donated livelihood empowerment materials like sewing machines and hairdryers for trainee seamstresses and ‘hairdressers,’ while also donating food items such as rice and cooking oil for the elderly.