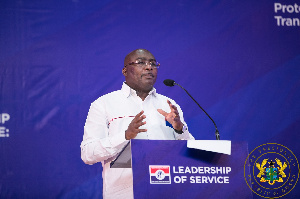 The New Patriotic Party returned to government in 2016 after losing power in 2008 after John Agyekum Kufuor’s two-term as President.

But in 2016, the New Patriotic Party fielded Akufo-Addo again and on his third try, he beat Mahama. A lot of credit was given to his Vice Presidential candidate since 2008, Mahamudu Bawumia and also a disenchanted middle class that piled pressure on the Mahama government in 2016.

For Dr. Kobby Mensah, a lecturer at the University of Ghana, that middle class trusted Bawumia for his views and proposals on the economy and thus supported him but that support has fizzled.

“Are Ghanaians satisfied that the platform that Bawumia stood on … he is a fantastic guy, for me, we have always been talking about young people in the seat.

“But he hasn’t delivered, we have to be straight. He hasn’t. All the platforms that he mounted…economic emancipation, taxation to production, have we had it?

“For me, that election (2016) was a middle-class election. The middle class rallied absolutely behind Bawumia, we all believed in him. I believed in him. But I don’t anymore, all those things that he said and not only myself… quite a number of my colleagues believed it could happen. It didn’t happen,” he said in an interview on Joy FM last week.

He also accused the Vice President of nicodemusly abandoning the economy and jumping onto the issue of digitization at a time of economic crisis.

Whiles, he underlined the importance of the digitization drive, he is quick to point that the economic issue is where Bawumia is needed most.

“When NDC selected Prof Naana, she is not an economist, how can she battle Bawumia. But Bawumia has left the economic platform long time ago, he doesn’t talk about the economy anymore,” he lamented.