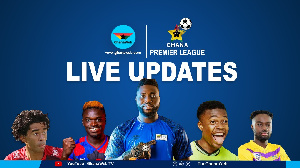 Hello and welcome to GhanaWeb’s coverage of the 2021/2022 Ghana Premier League season.

Hearts of Oak returns to the Accra Sports Stadium for their matchday eleven home game against Bechem United today, January 2, 2022.

The Phobians make a return to the Accra Sports Stadium for their Ghanan Premier League home games after playing their last two home games in Cape Coast.

Accra Hearts of Oak played in Cape Coast because the National Sports Authority closed the stadium for football to pave way for musical concerts despite telling the nation that renovation works were being done.

Bechem United occupies the 4th position on the league table with 17 points and will need to avoid a defeat against the defending champions Accra Hearts of Oak to go up in the standings.

Accra Hearts of Oak on the other hand are having a good run in the past three-match weeks having won two and drawn one against Accra Lions, Berekum Chelsea, and Dreams FC respectively.

They need to maintain their momentum to keep their title defense campaign in place as they occupy the 9th position and with two outstanding games against Medeama and Asante Kotoko.