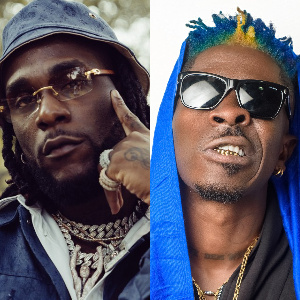 Burna Boy and Shatta Wale’s virtual fight has gotten dirtier by the day as the Nigerian artiste has called Shatta Wale ‘ugly’ in a reply to some insults Shatta Wale reigned on him on Twitter.

A post that was meant to address Shatta Wale’s divisive speech about Nigerians took a wild turn when Nigerian artiste, Damini Ebunoluwa Ogulu, popularly known as Burna Boy, accused Shatta Wale of being a pervert who masturbated in front of a girl who didn’t want to sleep with him and added that he was ugly.

“You ugly fuck. I know you masturbated into a cup in front of 1 girl that didn’t want to fuck you. You pervert,” he said.

The Nigerian artiste also went on to reveal the Range Rovers the dancehall artiste claims to own belong to one Seriki Abbas and asked Shatta Wale to let him know when he wants to learn a lesson.

“Your Range Rovers all belong to Seriki Abbas. Salty and others and you are a real life rapist. I got more to say but I’ve already done way too much talking and I’ve stepped out of my character so just lemme know when you want to learn your lesson,” he added.