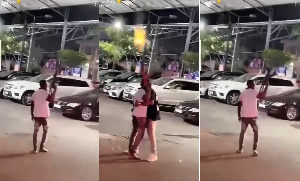 The Police have announced a GH₵5,000 bounty on information leading to the arrest of a young man who fired gunshots to celebrate entry into the New Year.

A statement of January 1, 2022, was accompanied by a video that the Police said they had intercepted.

“The Police have intercepted a video in which a young man is seen firing several shots of a firearm suspected to be AK 47 at ANC Mall, East Legon, last night, December 31, 2021, purportedly to welcome the new year.

“The Police have taken a serious stance against the actions of the young man since it is a crime to discharge a firearm in public without lawful and necessary occasion under Section 209 of the Criminal Offences Act 1960 (Act 29).

“The Police Administration after reviewing the video footage has placed an amount of Five Thousand Ghana Cedis (GH₵ 5,000.00) as a bounty for anyone who can provide information leading to his arrest to face prosecution,” the statement read.

In the said video, the gentleman is seen discharging multiple rounds of shots before he is approached by a colleague who hugs him all the while still firing shots in a place that seemed like a parking lot.

It will not be the first time the Police is chasing someone for displaying unlawful acts in public or that they are using social media footage to look for a suspect.

The arrests of musician Medikal who brandished a gun on social media, a private vehicle owner who recklessly drove in front of the police headquarters as well as a trotro driver who was caught urinating in public, are instances that the Police have goen after offenders.

Watch video of the incident as shared by the Police